The activities recorded include vegetarian propaganda at the Royal Show, Pietermaritzburg, and during Centenary Week, lectures to natives, letters to the press and clergy re World Day, and a Christmas appeal concerning humane diet, to which more than 100 persons responded. The President took part in the debate on Diptheria Immunization at the City Parliamentary Debating Society. Owing to the deeply regretted death of Mr. Sidney H. Beard, and the closing of the O.G.A. office in London, Natal is now the Headquarters of the Movement.
From The Animals’ Champion, September to November, 1939

The Christian Church Must Be Humanized
by Elsie M. Ireland, Hon. Secretary of the Order of the Golden Age, South Africa 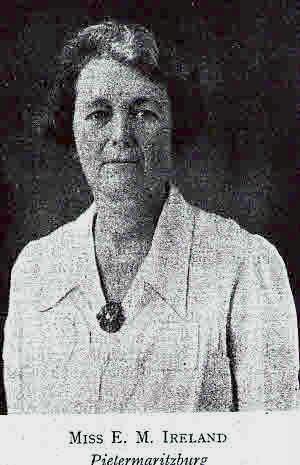 The urgent need for a campaign to humanize the Christian Church throughout the World is surely obvious to every thinking person. On every hand in Christian communities while a greater concern is being shown for the welfare of humans; sub-human life is being cruelly exploited to appease selfish human demands – the sacred festival of Christmas, the Birthday of the Prince of Peace as it is called, being made the occasion of suffering and slaughter of even more than the usual daily million of hapless creatures. Surely such a preposterous state of affairs cannot continue if, indeed, Christianity is to play its part in solving the great problems confronting this sad, sick world!

Since the inauguration in South Africa of the work of the Order of the Golden Age here in Pietermaritzburg, several incidents have helped to confirm my doubt regarding the efficacy of any missionary effort which is divorced from a practical humanity towards all sentient life. The first incident concerned a Native man employed at the local cold storage, who remarked to a visitor: “I think God will forgive the Native for occasionally killing a beast and having a feast, but I do not think He will forgive the white man for all this” – pointing to the sea of carcases around him.

The second incident was the experience of a lady lecturer on Food Reform visiting one of our smaller towns. When, as arranged, an Indian waiter brought a tray of lovely fruit to her room for supper prior to the lecture, she remarked: “You see, I am like you. I am a vegetarian.” Whereupon the man quickly replied: “I am not a vegetarian, M’am. I’m a Christian now. I eat plenty of meat.” No doubt the lady (wife of a Christian minister) lost no time in passing on the story to her husband. Conversations at our Literature Centre, especially with non-European enquirers, have corroborated my view that the general conduct of professing Christians in this matter is having a harmful effect and it is not surprising that the more advanced people to whom “non-hurting” is a vital religious necessity should be repelled by a religion whose adherents are so indifferent to the suffering of animals.

At present there are definite leanings towards faith healing – a much neglected method – and while one does not wish to discourage this, it certainly seems a pity that those who are sponsoring it do not urge the equal necessity for abandoning the use of products of butchery and vivisection which involve cruelty to animals, brutalising work for fellow humans and the introduction of poison and diseased matter into the human system. Christ very often indicated that sin, or wrong-doing, was the cause of disease.Could not much be avoided by a speedy and dynamic change on these lines? I can see no more obvious first step in the cause of World Peace.

Just as I conclude, information has come to hand regarding the prohibition of vivisection at the National Medical School in Mexico City and that the Government of Holland is instituting at the universities a Chair of Medicine dissociated from experiments on animals. To every worker in the great Christian Cause of Kindness this news will bring encouragement and relief. May these splendid examples of true culture and humanity prove to be the forerunners of a world-wide awakening of a happier and holier Civilization.