Within thirty years of the formation of The Vegetarian Society there arose a feeling amongst Food Reformers that “vegetarianism” had acquired awkward connotations.

Prior to the 1840’s, abstinence from animal flesh had been referred to as a “Pythagorean” or “Vegetable Diet.” The first appearance of the term “vegetarian” is reputed to have occurred within an editorial reply to a letter which appeared in The Healthian of April 1842. (1) The journal was published by The Alcott House Concordium, a socialist movement which along with members of the Bible Christian Church of Salford, founded The Vegetarian Society in 1847.

During the 1870’s, Professor F.W. Newman (1805-1897) – President of The Vegetarian Society between 1873 – 84 and brother to the Cardinal – was amongst the first to argue that the term “vegetarian” had become unfashionable. Newman was in his own words “… not known to vegetare” and suggested the more upbeat acronym of “V.E.M.’s” – for Vegetable, Egg and Milk partakers. (2) Other terms in minor usage at the time included “vegetist” and “kreophagy” – the former in reference to a vegetarian and the latter, to meat consumption.

The Order of Danielites adopted the term Akreophagy (anti-flesh eating) during the 1880’s, whereas Dr. Josiah Oldfield introduced the slightly grander variation of Aristophagy during a stint as Editor of The Herald of the Golden Age, in 1901. (4) The term “fruitarianism” arose in the 1890’s (5) and became the preferential description for the lifestyle of The Order of the Golden Age:

“To distinguish the converts of the Order from the members of all other societies, and to enable these toilers to work in this great harvest-field, free from the handicap of a name which smacks of faddism, the Order has elected to use the words “Fruitarian” and “Fruitarianism” and to discard as completely as possible the words ‘vegetarian’ and ‘vegetarianism’, for the latter words are the property of different organisations whose aims and methods are not the same, and whose sphere of work is amongst a different class of people”.
The Herald of the Golden Age; August 1902.

In the same year, Dr. Oldfield (1863-1953) – M.A., D.C.L., L.R.C.P., M.R.C.S.; founded The Fruitarian Society. It is an organisation of which little is known and which in all likelihood, would have been perceived as superfluous by the main Vegetarian societies. (6) However, the nature of the vegetarian movement was such that campaigners would often manoeuvre freely between kindred organisations. One such example would be that of Ernest C. Clifford ( 1865-1942); an Honorary Secretary of The Fruitarian Society, yet leading member of the London Vegetarian Society, since 1888. There were also local Fruitarian groups which were affiliated to the national network of regional Vegetarian societies.

The Fruitarian Society became dogged with dispute over its definition from as early as 1907. In that year, The Scottish Vegetarian Society featured an article in their journal entitled “Fruitarianism” by Dugald Semple (7) which contested that:

“By fruitarianism is meant a dietary consisting chiefly of nuts and fruits. Cooked cereals and vegetables are not necessarily excluded, although the exclusion of all cooked foods, should means and knowledge permit, will lead to better results. For this dietary it will be noticed that not only is flesh and meat omitted, but also the animal products milk and eggs. The use of these products by vegetarians has long been one of the chief objections to vegetarianism, especially in medical circles”
Health Reform, August 1907

A year later The Vegetarian Society journal contained a critique of some recent and typically controversial remarks, on the part of Dr. Oldfield:

“Dr. Oldfield on Fruitarianism. – The Polytechnic Magazine for March has a report of an interesting lecture by Dr. Oldfield, on “Diets for the Cultured.” He said: – “I have long tested my theories. It is thirty years since I have tasted any form of flesh, fish or fowl. I have had a very great experience and have had under my care between two and three thousand hospital patients, ordinary meat-eating people, who have at once been put upon a non-flesh dietary… I do not hesitate to advise all to give up eating meat… I object absolutely to vegetarianism, because the word smacks of onions and cabbage. It gives people the idea that you live on watercress and browse on odds and ends of garbage.”

Dr. Oldfield would substitute the word Fruitatianism for Vegetarianism. We are surprised that Dr. Oldfield should think it necessary to assume that the public understanding of vegetarianism is described in the words we have italicised. Those who are convicted intellectually, but not in their stomach, will rebel at any reform, by whatever name it may be called, which seems likely to rob them of delights they deserve to retain.”
From: The Vegetarian Messenger and Dietetic Reformer of July 1908. (8)

The eventual emergence of The Vegan Society brought with it a recurrent observation, in that:

“Vegetarian” and “Fruitarian” are already associated with societies that allow the ‘fruits’ (!) of cows and fowls, therefore it seems we must make a new and appropriate word.” (9)
The Vegan News – No.1., Nov. 1944

In the years which followed, The Vegan News featured articles on the fruitarian diet which, understandably, interpreted the system as being entirely detached from animal derivatives. The term “fruitarianism” was meanwhile evolving separately within North American literature to become interchangeable with that of raw food veganism.

Yet in publishing terms alone The Fruitarian Society was not without influence. Over 100,000 copies of Dr.Oldfield’s Best Food Series of nutritional pamphlets had been circulated by the time of the physician’s death in 1953. The Fruitarian Society was no stranger to stature within the food-reform movement; as a reception held by Dr. Oldfield, for a former room-mate, during 1931 would testify. (10) 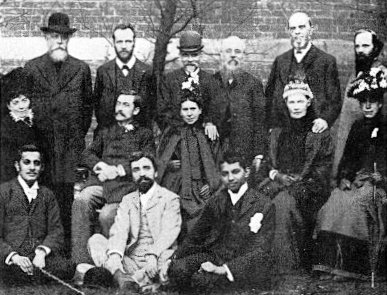 A Fruitarian Hospital was established at Bromley, in London during 1903, which was re-located to Doddington in Kent, in 1921, after the original premises became an Ex-Serviceman’s Club. In a pamphlet which was issued by The Fruitarian Society in 1952, Dr. Oldfield remarked that:

“In the grounds of the Lady Margaret Fruitarian Hospital there are many animals, and I have again and again suggested to patients who were chaffing a little during their first few days at the absence of flesh foods, that they should go out and cut a slice from the lamb, or kill the baby pony and make a rich soup for themselves, but the proposal has never once touched a responsive chord”.
The Crown of Grapes – Eat right and live long

The same tract touched upon theology:

“We see to-day that, in spite of all our progress and of all our influential freedom, we are still trying to do the same old trick of having our head in Canaan and our stomach in Egypt. It cannot be. We too must eat our way back to the promised land of milk and honey and vineyards and olive yards, if we would gain the great reward of health and happiness and peace”.
(Ibid.)

In the 1960’s The Fruitarian Guild was formed as a discussion forum based around the writings of Dr. Oldfield and published a quarterly bulletin; The Fruitarian. Whilst fruitarianism is today associated with a diet that is essentially uncooked and derived from fruits and seeds. (11)