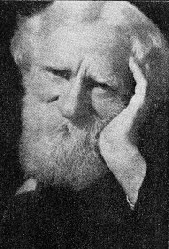 With the passing of Dr. Josiah Oldfield one of the few remaining links of the vegetarian movement with the Victorian era has been broken. How far back that link stretches is uncertain since he loved to make a mystery of his years, for, though his obituary notice states “in his 90th year,” he had the foible of being thought much older. When I was a boy of some ten years, I remember him – a middle-aged man in my eyes – coming on a bicycle to my father’s country cottage to a meeting of fellow vegetarians over fifty years ago.

Many and varied have been his life’s activities, for he originally trained for the legal profession and was called to the Bar at Lincoln’s Inn in 1892, and then proceeded to qualify as a doctor at Bart’s in 1897. Before these professions were acquired he was a schoolmaster, and with his savings (amplified by earnings as a strikebreaker in vacation time) he payed his university fees, a proceeding common enough amongst indigent students to-day, but surely exceedingly rare in those times. Like my father, he was a friend of Gandhi’s in the latter’s student days, and I believe both have claimed to have converted him to vegetarianism.*

Of his legal activities I know little, but there must be many who know much of his advocacy of food reform, for throughout his professional life he frequently took the platform, and even more frequently the pen, to disseminate his humanitarian and dietic views. Even in advanced years his writings retained the lucidity and elasticity of enthusiastic youth.

He was at one time Secretary of the London Vegetarian Society and for about fifty years he was physician to the Lady Margaret Fruitarian Hospital at Doddington, a somewhat remote village appropriately situated in the heart of the Kentish orchards.

As a practical and practising idealist in the cause of humanitarianism and vegetarianism, his influence has been great. A number of popular booklets in a lively and incisive style testify to his skill as a propagandist. His advocacy of fruitarianism (what we should term lacto-vegetarianism with emphasis on fruit) was especially valuable in the early days when the orthodox medical profession was outspoken against the so-called folly and danger of a meatless diet.

In addition to law and medicine he obtained a degree in divinity and went to India at the beginning of the century where, by his own account, he “lived for some time in a Yogi’s cave.” It is evident that he was well endowed with the moral courage so necessary to the championing of unpopular and idealistic reforms.

Dr. Oldfield was a living advertisement of his views, and if there be some who unkindly criticise vegetarians for living an unconscionable time, these same critics would be equally eager to denounce the practice if the exponent should have the misfortune to die relatively young. Dr. Oldfield, in continuing in health and vigour to the end, must have confounded his critics, the majority of whom he no doubt outlived.

We offer all sympathy to his daughter in a loss that is as much ours as hers.
B.P.A.