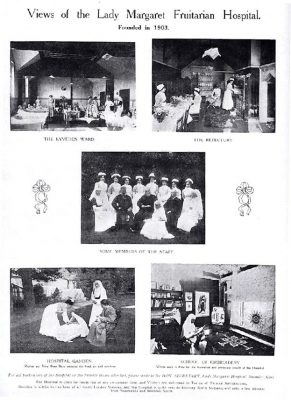 The following paragraphs concerning the meeting are from The Bromley Chronicle:-

“The Report and statement of accounts for the year were read, and in moving their adoption, Dr. Oldfield drew attention to several important points in his survey of the history of the hospital. In the first place he emphasised that all his colleagues, as well as himself, were more satisfied than ever at the end of the eleventh year with the importance of a Fruitarian diet in the treatment of all sorts of diseases. He drew attention to the fact that the mortality was exceedingly low and that during the whole history of it there had never been a death under anaesthetic, or as the result of an operation. In the early days his colleagues and himself always worked under a sense of special anxiety, because if they had had any such mortality, with the necessity of an inquest, the probability would have been that some unwise person would have suggested that the death had occurred because the patient had not had beef tea or mutton broth.

“The fetish of these meat extracts had been so great in the past that even to-day a large number of people knew no better than to believe that the only way to get strong, or to be strong, was to eat meat, although the experiences of the ages demonstrated that the best health and strongest stamina and the most enduring physique was obtained from fruit and grains and milk and cheese and oil. Dr. Oldfield emphasised the importance of the course of lectures that had been given to medical men during the year at the Royal Institute of Public Health by the Walker Lecturer on Dietics and stated that these lectures, which had been well attended by doctors from all parts of London, would bear most important fruit in the future in influencing their own practices. In this respect he paid a special tribute of thanks to Sir William Earnshaw Cooper and Lady Cooper for providing funds for the purpose, and having presented an Earnshaw Cooper Gold Medal in dietics to be competed for only by medical men.

“Dr. Oldfield then turned to an important suggestion of the future, which had also come from the kindly and generous mind of his friend, Sir William Cooper; this was that the Lady Margaret Hospital should be opened in a central position in London, and for the following amongst many other reasons. In the first place, so long as the hospital had its centre at Bromley, many people imagined that it was a Cottage Hospital of a provincial character, instead of being, as it is, a general hospital admitting patients from all over the country and largely from the South-East of London. In the second place, the world pays so much attention to names rather than to things, and since the hospital is fighting for a great principle and a great change in dietary, it was important to secure everything that might be of assistance to them, and the name of a hospital in the centre of London was of itself a great factor of importance in popular opinion. The third point was, that to get the latest and best medical help, the highest skill in medicine and surgery, it was necessary to be definitely near to a central spot, as the difficulty of medical provincialism had always to be contended against, so long as the hospital was in the suburbs. Lastly, that now that the hospital had a fund for a lectureship and a scholarship in dietics, it was important to have a central hospital where enthusiastic medical students of to-day, who had the time and inclination and a flexible mind, would be able to study dietary in its relation to disease, and by this means a new school of medical dietics would be possible.

“The Countess of Donegal moved a vote of thanks to the honorary officers for their work during the year.

“Dr. Vawdrey, in a very charming and kindly speech, pointed out that although he had held many medical posts, he was more proud of being on the medical staff of the Lady Margaret Hospital than of any other post he had ever held. During the years that he had been on the staff he had become more and more struck with the work the hospital was doing, with the great importance of dietary in the treatment and cure of disease and with the wonderful spirit of willingness and glad service which pervaded the whole of the staff. He so entirely approved of the scheme for having a central hospital in London that he undertook at once to double his annual subscription.

(Abridged from: The Bromley Chronicle, May 7th, 1914 and originally entitled:
“Fruitarian Diet – important developments at the Lady Margaret Hospital”)

The Herald of the Golden Age, April 1913